By now you've noticed I'm featuring book series for Wacky Wednesday!  Many of you have grown up with reading or know Jane Yolen's books from teachers.  This intro is for those new to her books.  Although she's written 300+ books in many genres, I'm focusing today on her "Dinosaur" series since I purchased "How Do Dinosaurs Say Goodnight," (2000, illustrated by Mark Teague), for my nephew's toddler.

I love that book.  (I even bought a stuffed toy dinosaur to go with it.)  It's a perfect bedtime story for kids reluctant to go-to-bed .  It emphasizes that even though your child may not want to go to bed at bed time, there's a right way and wrong way to "protest."  Ms. Yolen does it with style and in rhyme: 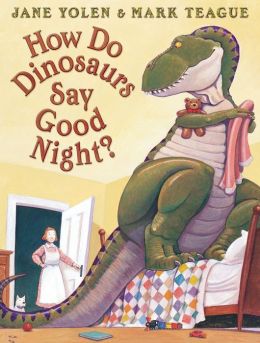 "How does a dinosaur say goodnight

when papa comes in to turn off the light?

Does a dinosaur slam his tail and pout?

Does he throw his teddy bear all about?"


It's funny to see huge dinosaurs listening to their puny human parents.  But it makes its point in a cute and clever way.

There are many silly books in her dinosaur series, all dealing with subjects near and dear to parents' hearts: 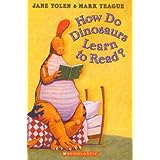 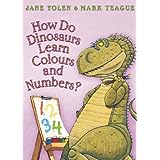 How Do Dinosaurs Learn Colours and Numbers? (2008)