Powder Monkey by Donna McDine, illustrated by K.C. Snider, is strong historical fiction. It tells a story of a harsh period in British naval history that is not for the faint of heart. Two brothers are taken by the Royal Navy Press Gang and impressed into service aboard a warship. These boys, aged twelve and fourteen, are destined to run powder to the cannons during battles at sea.

Tommy, the younger brother, is witness to the brutality of the press gang against his parents, who try to save their boys. He sees other boys, his neighbors, also taken into service. These farm boys have to learn to survive as servants of the crown, at the beck and call of the sailors they serve. These “powder monkeys” experience violence, and must perform the vilest duties aboard ship.

K.C. Snider’s artwork captures the agony and horror suffered by those boys at that time in history. The haunting images she creates take us back to that awful period. We see the smoke, the filth, and the danger in these boys’ lives. It’s a wonder any of them lived through such an awful experience.

Tommy’s will to survive overcomes his terrible circumstances, his pain, and his losses. He learns what he needs to do and does it. Although he never sees his parents again, he does become an able bodied seaman, and that’s as close to a happy ending as we get in this story.

There is a lot to discuss here with students, especially those who might want to complain about their situation now. All they need to do is look at what happened to those boys back then. History lessons can be hard to hear – and harder to learn -- but these stories must be told.

This review is part of the World of Ink Virtual Blog Tour.
Posted by penelope anne cole at 12:21 PM 13 comments:

Here are two more interviews by Lorna d'Entremont (of Special Needs Book Review) about my Magical book series, Magical Matthew and Magical Mea, and me, too!

These interviews are in Kid Companions (for Kids that Love to Fidget and Chew):

Great Gobs of Gustation: The Sum of Our Parts  Book 8 Academic Wings
by Bill Kirk, art by Eugene Ruble
http://www.guardianangelpublishing.com/gustation-tsoop.htm

A rhyme which describes the sense of taste and how it works to help you tell what you like to eat and what you don’t. Book 8 of the Sum of our Parts anatomical educational series

by Judith J. Miller, art Sonal Panse
http://www.guardianangelpublishing.com/just-too-little.htm
At her grandparents farm Pam is too little to help with the chores.

After a day of fun and trouble, what will Kelly’s new mischievous puppy do next?

I'm pleased to refer you to a lovely new review of Magical Mea, by Lorna d'Entremont on her Special Needs Book Review site.  Here is the link:
http://www.specialneedsbookreview.com/2013/09/06/second-childrens-book-magical-series-magical-mea-penelope-anne-cole/ 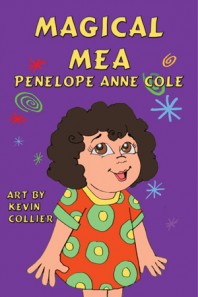 Early in 2013, Special Needs Book Review published a guest post from Penelope Anne Cole about her children’s book, Magical Matthew.  In this book, Matthew can fix things magically. Matthew secretly uses his magical powers to fix things for his family and friends.  Later, he expands his magical good deeds by fixing things in his neighborhood.  Matthew’s best friend and neighbor, Lily, who is in a wheelchair, suspects something is special about him.  Matthew must decide whether he can trust her with the truth.  His Grandmother becomes his confidant as he makes the decision to trust Lily.  Later, Matthew loses his magical powers and needs to accept how he has changed to continue to grow and learn.
Now Penelope  Anne Cole has written her second book in the “Magical Series” called Magical Mea. Mea got her magic when Matthew lost his. Matt tries to guide Mea to use her magic for good. But the more Matt tries to mentor Mea, the more she wants to “do it her way.” Matt worries Mea might get into
- See more at: http://www.specialneedsbookreview.com/2013/09/06/second-childrens-book-magical-series-magical-mea-penelope-anne-cole/#sthash.QdTTt8IG.dpuf
Posted by penelope anne cole at 3:50 PM 2 comments:

PARENT TEACHER ARTICLE
Cyber Bullying: Its Prevalence and What to do about it? by Irene S. Roth

Celebrate with me by getting your own copy!

Posted by penelope anne cole at 8:44 PM No comments: