Chip’s Sharing Day, by Linda Derkez with art by Phoebe Doehring, is a book that both boys and girls can relate to and enjoy.  His mother tries to teach Chip to be “kind and nice” and share his toys.  Then Cousin Dorcas comes to visit.  Chip is in that “what’s mine is mine” stage.  He isn’t ready to play nicely and share.  Instead, he’s being bratty.  Chip takes back whatever Dorcas tries to play with, and calls her “Dorkie.” 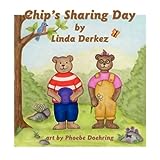 It’s a good thing Dorcas isn’t quite as shy and nice as she first appears.  She’s sneaky and beats Chip at his own game.  This is just what he needs, a little friendly comeuppance that wins his respect.  Finally, they can be friends as equals.

Phoebe Doehring’s illustrations clearly show Chip’s feelings.  We see his scowling facial expressions as he resents his cousin at first, and tries to keep her away from “his” things.  In the end, Cousin Dorcas wins him over by tricking him as he might have done to her.  Doehring’s artwork is in the American Folk Art style.  Her engaging pictures add to our enjoyment of the “Aha” ending.

This story helps kids understand how their actions affect others.  It’s one thing to be told to play nice and share, and another to see your behavior reflected in others.  The best situation is when “the playing field is level” and both can tease and play instead of it being one-sided.  Kids learn by observing behavior modeled by others.  Here Chip sees how his bad behavior affected Dorcas when she turns the tables on him.  Parents and teachers will have plenty of fodder for discussing “appropriate behavior” when reading this story.

Available from http://www.guardianangelpublishing.com
Posted by penelope anne cole at 1:35 PM